Added to wishlistRemoved from wishlist 0
Add to compare
Category: Software 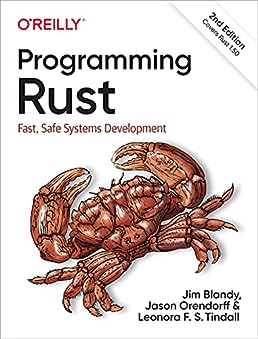 With this practical guide, experienced systems programmers will learn how to successfully bridge the gap between performance and safety using Rust. Jim Blandy, Jason Orendorff, and Leonora Tindall demonstrate how Rust’s features put programmers in control over memory consumption and processor use by combining predictable performance with memory safety and trustworthy concurrency.

Rust is a language for systems programming.

This bears some explanation these days, as systems programming is unfamiliar to most working programmers. Yet it underlies everything we do.

You close your laptop. The operating system detects this, suspends all the running programs, turns off the screen, and puts the computer to sleep. Later, you open the laptop: the screen and other components are powered up again, and each program is able to pick up where it left off. We take this for granted. But systems programmers wrote a lot of code to make that happen.

The amount of systems code involved in supporting a basic app is staggering.

But if you are a seasoned systems programmer, you’ll find that Rust is something exceptional: a new tool that eliminates major, well-understood problems that have plagued a whole industry for decades.

Who Should Read This Book

However, you don’t just need to learn Rust. To get the most out of the language, you also need to gain some experience with systems programming. We recommend reading this book while also implementing some systems programming side projects in Rust. Build something you’ve never built before, something that takes advantage of Rust’s speed, concurrency, and safety. The list of topics at the beginning of the book’s preface should give you some ideas.

Why We Wrote This Book

We set out to write the book we wished we had when we started learning Rust. Our goal was to tackle the big, new concepts in Rust up front and head-on, presenting them clearly and in depth so as to minimize learning by trial and error.

There are no reviews yet.

Added to wishlistRemoved from wishlist 0
Add to compare

Added to wishlistRemoved from wishlist 0
Add to compare
$54.00

Buy Now
About us

Bionfree.com is a participant in the Amazon Services LLC Associates Program, an affiliate advertising program designed to provide a means for sites to earn advertising fees by advertising and linking to Amazon.com

This website uses cookies to improve your experience while you navigate through the website. Out of these, the cookies that are categorized as necessary are stored on your browser as they are essential for the working of basic functionalities of the website. We also use third-party cookies that help us analyze and understand how you use this website. These cookies will be stored in your browser only with your consent. You also have the option to opt-out of these cookies. But opting out of some of these cookies may affect your browsing experience.
Necessary Always Enabled
Necessary cookies are absolutely essential for the website to function properly. These cookies ensure basic functionalities and security features of the website, anonymously.
Functional
Functional cookies help to perform certain functionalities like sharing the content of the website on social media platforms, collect feedbacks, and other third-party features.
Performance
Performance cookies are used to understand and analyze the key performance indexes of the website which helps in delivering a better user experience for the visitors.
Analytics
Analytical cookies are used to understand how visitors interact with the website. These cookies help provide information on metrics the number of visitors, bounce rate, traffic source, etc.
Advertisement
Advertisement cookies are used to provide visitors with relevant ads and marketing campaigns. These cookies track visitors across websites and collect information to provide customized ads.
Others
Other uncategorized cookies are those that are being analyzed and have not been classified into a category as yet.
SAVE & ACCEPT